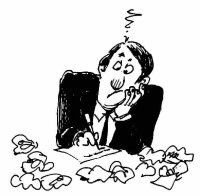 I guess one of the biggest headache that writ­ers or blog­gers have nowa­days are the sud­den hit of ‘blank­ness’ when it comes to writ­ing something.

Before blog­gers are com­mer­cial­ly known, it was called the writer’s block.

Any­ways, I have a few things that I have in my mind right now, sev­er­al that could be blog wor­thy, but I doubt that I would want to pen them down. Rea­son because it might be a lit­tle too short to be a blog wor­thy post.

Now, some might thing that I am too lazy to strike up a post or 2. Well, maybe I am but I dis­sent that I am. I was just afraid that I might digress into some­thing else, like most of the time.

Now, for me to churn up some­thing like what I write is not a sim­ple task. Due to some unfore­seen habits, I tend to make a lot of gram­mar mis­takes. I was born with Britain Eng­lish, but I pre­fer to write in Amer­i­can Eng­lish. I used to get fucked up in school by the teach­ers because I pre­fer to spell col­ors instead of colours.

So instead of putting each top­ic that I want to talk about on sep­a­rate posts, I am going to put every­thing here instead.

Let’s start with [MSN conversations](http://www.cedricang.com/a/randomly-thinking/msn-conversations-20071225/ MSN Con­ver­sa­tions”). Nev­er fail, peo­ple kept on adding me ran­dom­ly on MSN, and then when they come back online after I approve them, they come ask­ing me “u r”. I don’t know, call me out­dat­ed or some­thing, but is that a replace­ment for “Hel­lo” or “Hi” these days? I mean, if you would want to strike up a con­ver­sa­tion (whether it ends with a fuck or not) why can’t you just say hi? Would­n’t it give peo­ple bet­ter impres­sion than a bla­tant “u r”? After that ” U R” thing, then it will pro­ceed to “ASL”; it nev­er fails. I don’t need a moth­er in law now.

Toi­lets, you have to hate them some­times. Fine if you are in Gar­den’s Pre­mi­um Toi­let where you pay to get your dick cleaned, but we are talk­ing about pub­lic toi­let that the major­i­ty of the pigs uses. That’s right, the old stinky pub­lic toi­lets. I have been to the ones in Mid­val­ley, it is a busy joint alright. You see peo­ple come, and peo­ple go. Pee drips on the floor, and espe­cial­ly the Mid­val­ley uri­nals, how bad­ly can it be designed. Imag­ine one of the uri­nals is so near the exit, when one walk it, you can already see the wee wee of the per­son who’s doing his pee pee.

That’s just not it, the place stinks. Not because there was­n’t any clean­ers to clean, but because some peo­ple just refuse to stand clos­er to the uri­nal so that their pee would not drip on the floor. Not every­one has got a 7 inch­er, you pigs. If you don’t have a 7 inch­er, then fuck­ing stand clos­er so your pee don’t drop out of the urinal.

Men don’t sit on the toi­let seat when they pee, it would not be too hard to just lift the cov­er up in case your wee wee can’t aim as good as you thought it would. FUCKING LIFT UP THE SEAT LAA!

Dri­ving on the road in KL sucks too. Motor­cy­cle don’t stick to the left lane, they like to hog to right. Hog­ging is one thing, but trav­el­ing at the speed that even my grand­moth­er could walk faster is def­i­nite­ly ask­ing for trou­ble. Gen­er­al rule of thumb, you want to be trav­el­ing faster than the aver­age traf­fic so that peo­ple don’t need to avoid you, just in case some blind fucks in the car can’t see you. Then again, peo­ple on the bike nowa­days don’t know that. No won­der the fatal­i­ties for motorist are so damn high.

What irks me out is when I go to the bar, peo­ple would buy me drinks. Well a drink or 2 is fine, but a drink for my num­ber, or try­ing to get me to your bed? It’s way too easy, bud­dy. Even I don’t do that.

Get­ting me to the bed is easy, all I need is to get com­fort­able with you. I mean if you are just going to offer me a drink, and them bom­bard me with ques­tions like I am your answer­ing machine, well thanks but no thanks, I can afford my own drinks.

What’s for lunch?
Nuffnang Paid me