I must have been the most hap­pi­est guy on earth right now.

Indulging myself with the cake that David had bought me, it sent me into deep thoughts again. 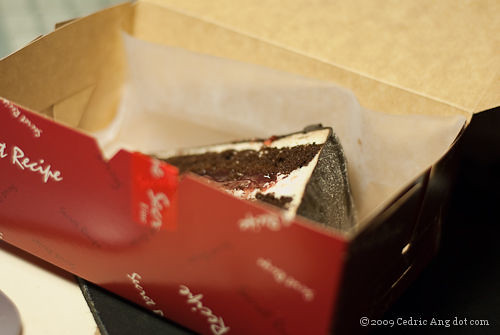 I do won­der some­things, why can’t we as human being be nicer to each oth­er, and every­one is hap­py. Instead, we choose to have our self­less thoughts, putting our dif­fer­ences in front of us all the time, and often us that as an excuse to take grudge against one another.

With­out a doubt the out­ing with David was a good one.

Pavil­ion was the place we vis­it­ed. David want­ed to get him­self a short pants, and we went all over Pavil­ion scout­ing for one. We both agree that our taste in men are sep­a­rat­ed by the space the sep­a­rates the heav­en and earth. It was just way too much difference.

I would going out with a young guy, some­where between the age of 18 to 22. Does­n’t have to be per­fect look­ing, decent per­son­al­i­ty and a nice smile would be a plus. David on the oth­er hand, pre­fer the more hunky mature type of guy, rang­ing between the age of late 20s to ear­ly 30s. Of just maybe, it is a good thing.

At Phi­los­o­phy Men, we saw this real­ly nice pair of trousers. We went in to the store also to check out the two hot guys there. Well he the old­er one, and me the younger one.

It was also the first time where David stripped him­self in front of me, reveal­ing that sexy brief of his, and in black. Sport­ing a good set of abdom­i­nal mus­cles, I can see why Har­ry was so fond of David as well. Although it was just a ‘sneak pre­view’ I had always imag­ined how David would be like from all the teas­ing that I give him all the time. Some peo­ple are just born with a good set of abdom­i­nal mus­cles, I supposed.

Per­haps one of the rea­sons that I refuse to get myself into Pavil­ion is because me and the boy used to go there almost every alter­nate week. Besides Mid­val­ley, we had wan­dered all around KL, help­ing the peons pol­ish­ing the floors of the malls with our brand new Nike’s and Adidas’.

I remem­bered telling the boy one that that I would give him a thou­sand ring­git spend­ing mon­ey. He was stressed out, and I thought per­haps some retail ther­a­py was best for him.

While pen­ning down this entry, I cried again. Thoughts were lost because there are just too many of them to be put into words and writings.

Whilst I miss the boy a lot, while many had hap­pen after the year that we broke up, I do not think I would wish that we both get togeth­er again. I do hope that we can remain as friends, tak­ing care of each oth­er. At least, per­haps, some peo­ple are much more hap­pi­er than me right now.

The Spaghetti incident
The prank that went wrong