“Cedric, you ex boy friend looks like my friend. He is my junior and he looked exact­ly like him”

That was what he told me when I first showed him the boy’s pic­ture over the Inter­net. I had slow­ly got­ten over the whole break-up thing, but I was­n’t still sure that I have put the boy aside, and con­tin­ue with what is going on what is in front of me.

I sup­posed I can­not for­get the fact that I can eas­i­ly fall in love, even back in my heart, I still think about the boy, all the time.

“Hey, lets go for a movie or some­thing, we can go after school, if that is alright with you. How about Time Square, it’s con­ve­nient for both of us, right?”

Indeed, we met up that day, and my heart melt­ed look­ing at the charm­ing boy stand­ing in front of me. It was that time that David sent him a sms, say­ing that he would be com­ing over to KL. David, the name reminds me of some­thing, some­one that I had real­ly adore and cared for back in the days. David oh David.

Har­ry gave David my mobile so that David could con­tact me to arrange a meet up when he gets to KL.

Har­ry came over to my house that day. 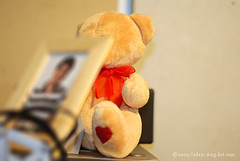 At some point of time, I fell in love with David already. With­out look­ing at his pic­tures, with­out know­ing much about him.

At the same time, I felt disgusted.

Har­ry told me that he did it with David before. Twice or thrice, but that was­n’t the point. The point is that David just want it in, with plea­sure. I guess, like they say, sex is always fun, and ful­fill­ing if you are going to have it with some­one that you like, or cared about. By the way, per­haps it was one of the times where I fell in love with Har­ry even more.

Some­thing went wrong in our exchange of text mes­sages. David sud­den­ly told me that he would not want to con­tin­ue to talk to me. I did in fact told David that I dis­like cer­tain things that most gay peo­ple do, the ‘height & weight’ inter­ro­ga­tion. He got so pissed off per­haps with my bad choice of words, he scold­ed me, and called me crazy.

There and then, my heart felt like sink­ing to the depths of Titan­ic. It hit the ocean floor so hard, waves and waves of tears came attack­ing that already gloomy night as aftershocks.

I don’t know at which point, but Har­ry asked me to let it go, per­haps try it anoth­er time, per­haps never.

My heart still impris­oned in the bot­tom of the cold dark ocean.

6 Responses to The boy that broke my heart