By Cedric on February 11, 2020 in Blogging, Encounters 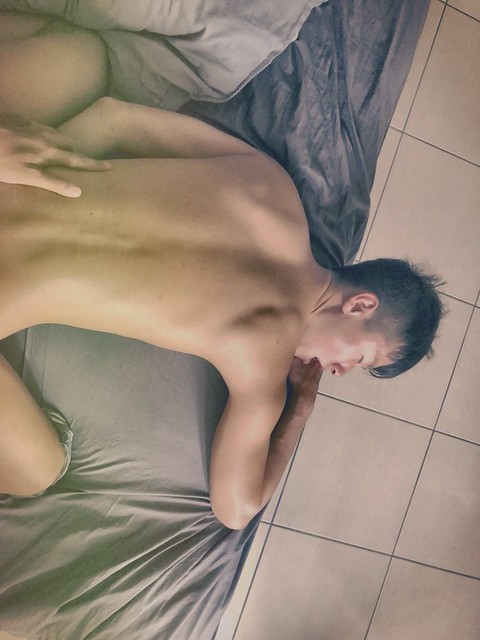 Sport­ing a slen­der body I met Abel down­stairs of the place that he was staying.

Abel is an Inter­na­tion­al stu­dent from China.

With the cur­rent pan­dem­ic that is hap­pen­ing, I thought it would only be appro­pri­ate to write about my encoun­ters with this one Chi­nese boy that I grew a lit­tle fond of.

I met this boy when he was a for­eign stu­dent here in one of our local uni­ver­si­ties. He hopped on to my car, chat­ted for a bit (like get to know me bet­ter before the actu­al fuck) and then I fol­lowed him to his apartment.

It was a maze, going through doors after doors, guard posts after guard posts. We end­ed up at this refuse room and he closed the door behind us.

We were in total dark­ness. I then felt some­thing touch­ing my chest, then slow­ly moved to my crotch. I could feel the warmth of his breath on my cheek, then his wet lips touch­ing mine.

He then put his hand on my head and pushed my head down to his crotch. With anoth­er hand, he aimed his dick towards my mouth, shov­ing it in the process. He had already tak­en off his pants, sport­ing that full hardon.

I con­tin­ued suck­ing him, ful­ly aware that we were in the garbage room, in pitch dark­ness. I dare not touch the floor or the walls but it did not smell like a garbage room.

We met for the sec­ond time. This time I guess his place was emp­ty and he invit­ed me to his room.

Still on his lap­top when I arrived, he quick­ly turned it away. With­out much hes­i­ta­tion, he pushed me towards his crotch for me to take a whiff, and then he took off his pants so I could smell more of his boy­hood through his underwear.

After a good whiff­ing, he slides his dick out of his under­wear, half erect and made me suck on it. I did what I did the last time, bit­ing him acci­den­tal­ly in the process, and per­haps again, he got frus­trat­ed and turned me around prepar­ing to fuck me.

He lubed up his dick thor­ough­ly and then aimed it at the open­ing of my butt hole. With­out hes­i­ta­tion, he shoved it right in, quite the vio­lent this time. I yelp in shock and pain; my love tun­nel just isn’t ready to accept this for­eign object in its cav­i­ty. As I was on my knees, I can’t help myself but to lurched for­ward, pulling away from his thrusts.

He has since left Malaysia back to Chi­na. I did try to get back in touch with him when I was work­ing in Shang­hai, but some­how either I was ignored, or he sel­dom get on Wei­bo, the chan­nel which I approached him with.

Another Virgin
No title